Meridiem Games to distribute the PlayStation 4 retail boxed edition of the acclaimed horror game on 20th July across Europe and Australia.

Madrid, Spain – 18th June 2021. Meridiem Games has today confirmed that the PlayStation 4 version of Song of Horror, the acclaimed horror game developed by Protocol Games and published by Raiser Games, will launch as a boxed Deluxe Edition on 20th July 2021.

A must have for any horror fan, this boxed Deluxe Edition will be available across European and Australian specialist stores and will include a special artwork sleeve, a map where players can note clues they find during the game and a character guide, explaining their abilities and relationship to the story. 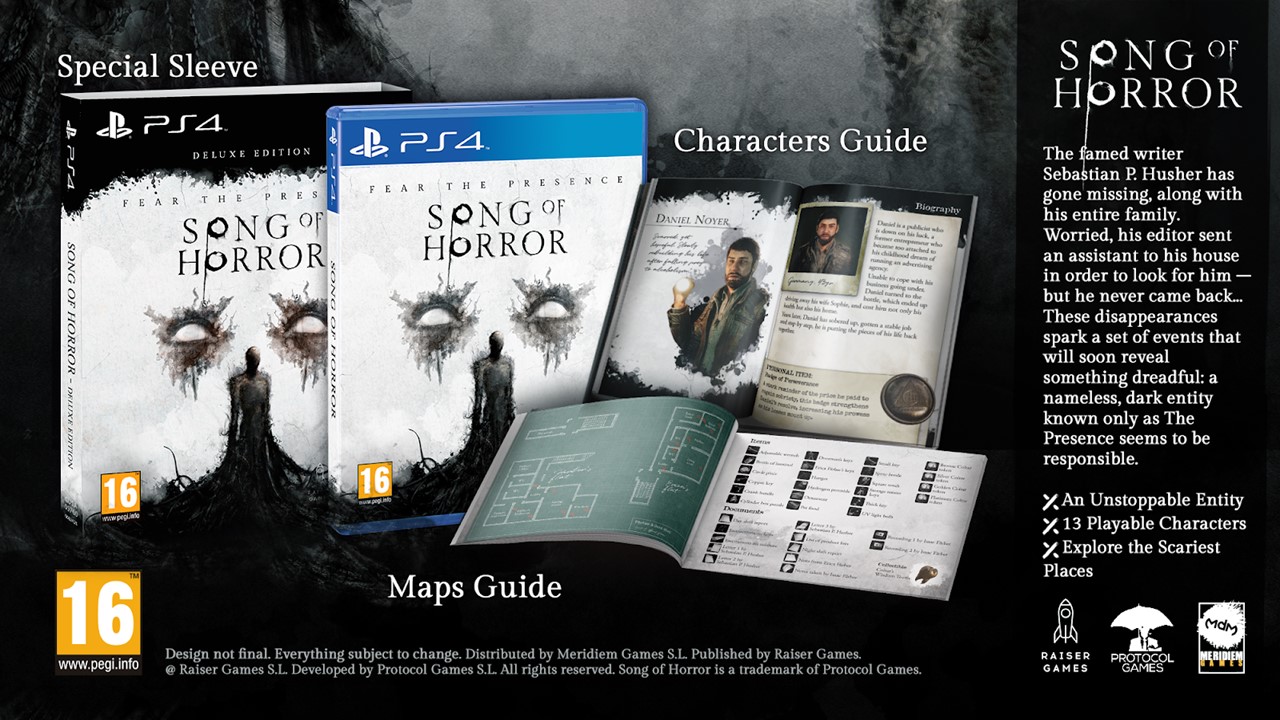 About Song of Horror

Song of Horror is a cinematic third-person horror adventure focusing on a terrifying narrative inspired by the literary works of Poe, Lovecraft and M.R. James.

Famed writer Sebastian P. Husher has gone missing, along with his entire family. His editor, worried by the loss of contact, sends an assistant to Husher’s home to check on his well being. He never returns. These disappearances spark a series of terrifying events, revealing a dark entity known only as The Presence that seems to be at the centre of the horror that unfolds.

The boxed Deluxe Edition of Song of Horror will be available across European and Australian specialist stores for PlayStation 4 on 20th July and can be pre-ordered now.  For more information, please visit www.meridiem-games.com/en

Meridiem Games is an independent video game publisher and distributor for all console platforms. The entire Meridiem Games team is focused on satisfying the demand of players who are fond of physical editions, titles such as Fahrenheit 15Th Anniversary PS4, KUNAI Day One Edition NSW, Daymare: 1998 Black Edition PS4, Pang Adventures Buster Edition PS4 / NSW, etc … released in its physical edition thanks to Meridiem Games. Click here if you want to be updated about us. https://meridiem-games.com/

Raiser Games is Webedia’s boutique game publisher. With over 200 games behind our backs, our talented team of professionals helps independent developers to bring their best ideas to life by producing, marketing, publishing, and distributing their projects on multiple platforms and on a worldwide scale. Our flagship title, Youtubers Life , is a trendsetter, million-player franchise with a unique spin on the life simulation genre. Our diverse portfolio includes the Lovecraftian cult-hit Song of Horror , the quirky arena shooter Goat of Duty , and the MOBA manager spin-off Esports Life Tycoon, among others. We strive every day to fill the world with fun and games for everyone. A Raiser Game is both an entertaining experience, and a friendly community where players feel at home.

Protocol Games is a Madrid-based studio created in October 2014 by Ignacio F. Herrero and Carlos G.F. Grupeli, two friends who dreamt of making memorable games that made others feel the way they felt playing classic video games. They’ve spent the last 5 years bringing their idea of how true, raw fear feels like into life.