Meridiem Games are pleased to announce that Effie, the exciting 3D action-adventure game developed by Inverge Studios and published by Klabater, will launch this autumn as a special boxed ‘Galand’s Edition’ for Nintendo Switch.

Combining classic elements from the genre such as combat, platforming and puzzles, Effie takes you on a unique fantasy adventure in an expanded game world and relives the look and feel of old-school video games.

The special Galand’s Edition of Effie for Nintendo Switch will include a specially designed case, a concept art book showcasing how the beautiful design of the game was forged and a poster of our bearded hero. 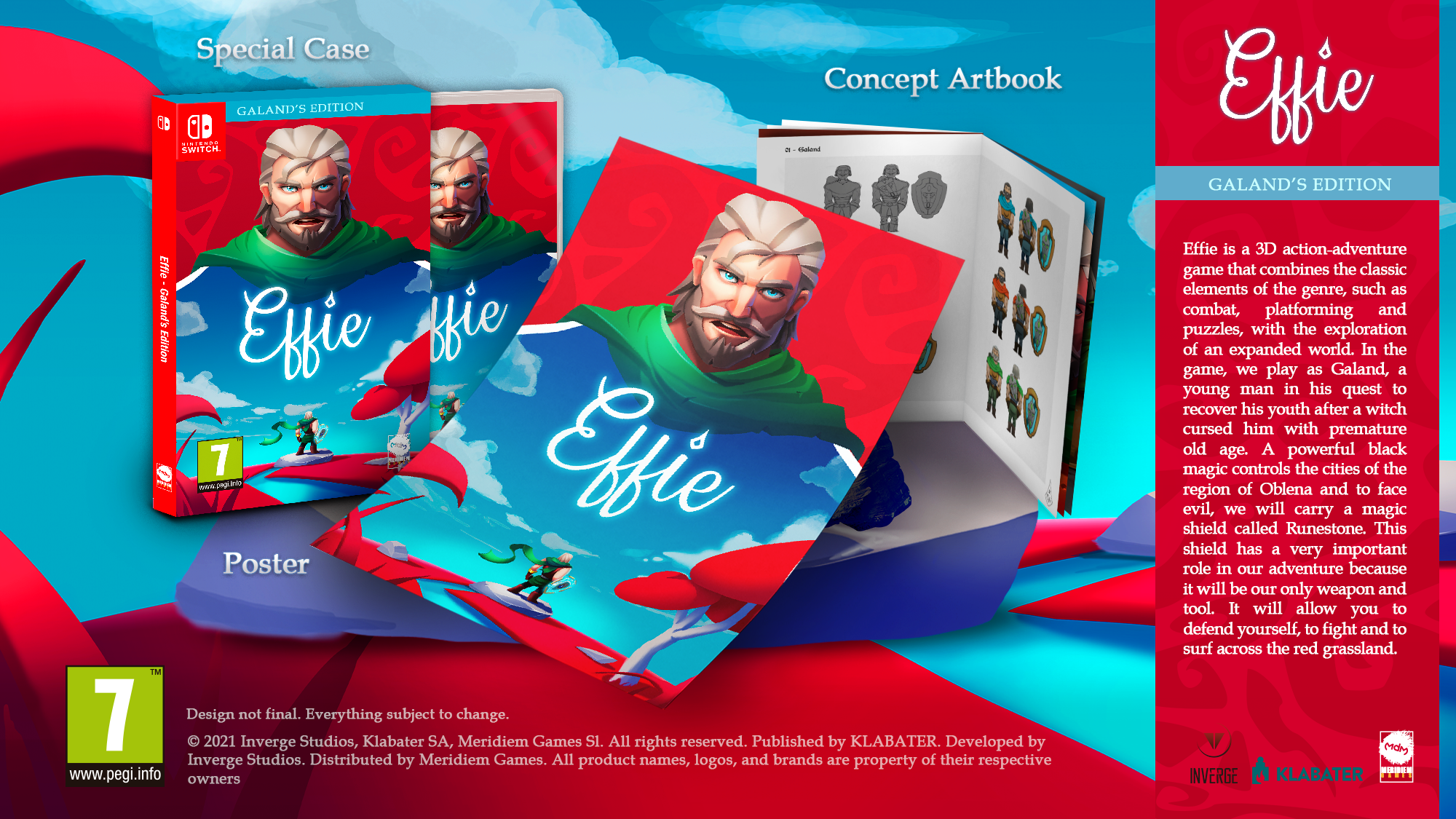 Get ready for a unique 3D action-adventure experience as you dive into the adventure of Galand, a man who has been cursed with premature old age. On this journey, Galand will have to find a way to break the curse, fight powerful enemies, solve challenging puzzles and explore a vast red world of fantasy.

A powerful black magic has taken control of the cities of the region of Oblena. To face the evil ahead, Galand will carry a powerful magic shield that grants him special abilities and allow him to acquire new skills during his journey. It will also allow him to surf at great speed through the vast world of Oblena.

We all have fond memories of those incredible classic 3D action-adventure games, and Inverge Studios has used these references to bring those sensations back to life again, but with enhanced graphics, controls and game-play!

Effie is inspired by classics of the genre like Ratchet and Clank, Legend of Zelda, Rime, Yooka Laylee and many others.

Effie – Galand’s Edition will be launching on Nintendo Switch as a special boxed version this autumn.  For more information, please visit www.meridiem-games.com/en

Meridiem Games is an independent video game publisher and distributor for all console platforms. The entire Meridiem Games team is focused on satisfying the demand of players who are fond of physical editions, titles such as Fahrenheit 15Th Anniversary PS4, KUNAI Day One Edition NSW, Daymare: 1998 Black Edition PS4, Pang Adventures Buster Edition PS4 / NSW, etc … released in its physical edition thanks to Meridiem Games. Click here if you want to be updated about us. https://meridiem-games.com/

Inverge Studios is an indie video game development company located in Lanzadera®, Valencia (Spain). Founded in 2016, it has made numerous games for the mobile video game market, obtaining several recognitions. In 2018, the development of the game Effie began with the PlayStation®Talents program. Effie was published in PlayStation®4 on June 4th, 2019 and later on PC platforms (Steam®, Humble Store®), Xbox One® and Nintendo Switch®. Now the company is developing a new game for consoles and PC.