The 6th Anniversary version design supervised by Tite Kubo of Sosuke Aizen was revealed during the Bleach: Brave Souls 6th Anniversary Bankai Live (https://www.youtube.com/watch?v=gyYvdsg1HJs). There will be exclusive in-game campaigns including up to 100 free Summons and special event quests to commemorate the 6th anniversary.

Also, be sure to join us for the Brave Souls 6th Anniversary RT Campaign where 2,000 lucky winners will be chosen at random from everyone who retweets with the hashtag to get Brave Souls original swag and other great prizes! 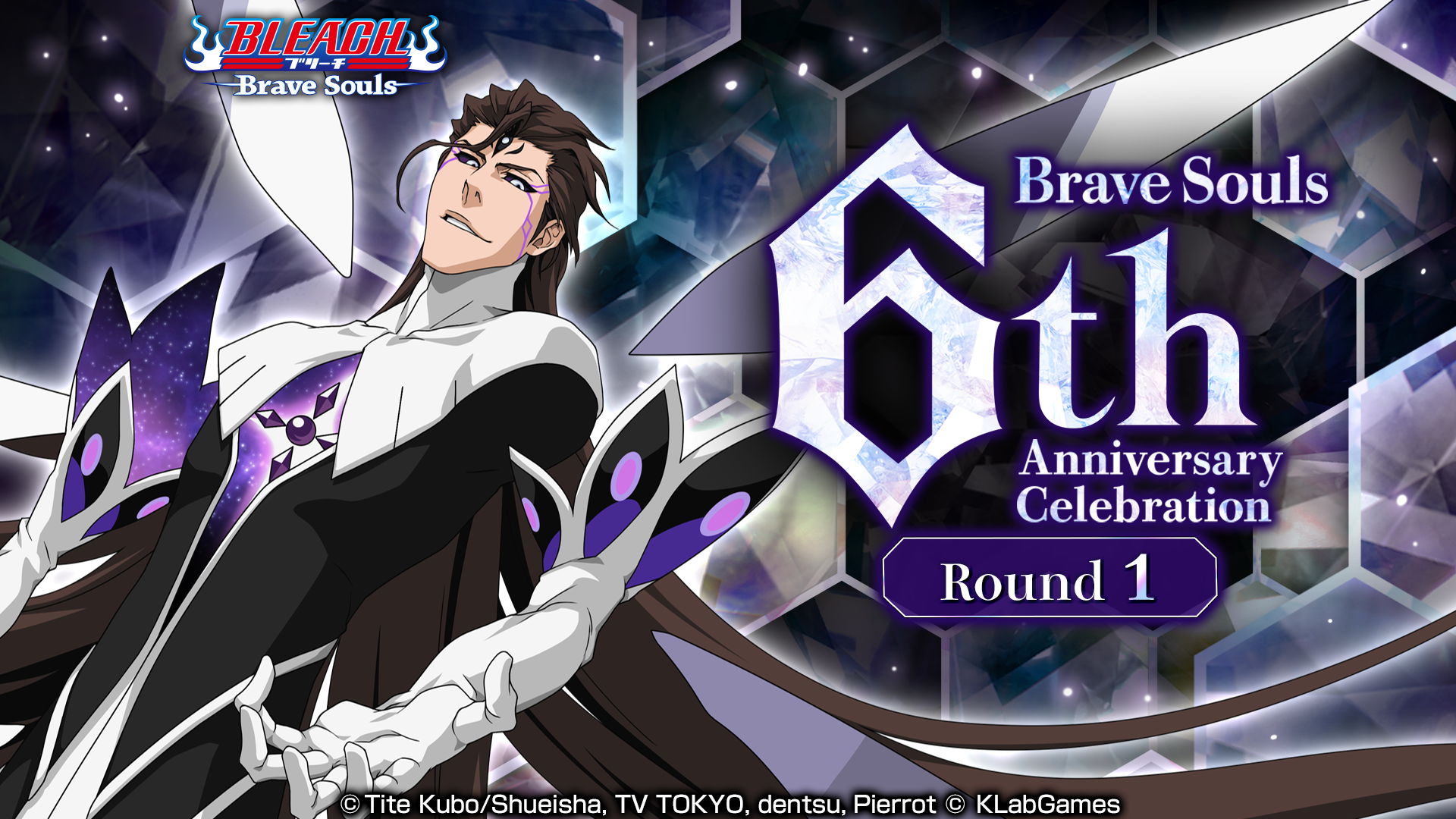 Don’t miss out on this chance to play the exhilarating 3D action of Bleach: Brave Souls!

This special Summons features a specially designed 6th Anniversary version of Sosuke Aizen supervised by Tite Kubo! Step 1 is free and Step 6 guarantees one of the twelve featured ★5 characters.

As a huge thank you to the entire community for supporting the game over the last six years, Bleach: Brave Souls is giving away one free ★6 character to every player in the 6th Anniversary Choose a ★6 Summons. Players will get to select 10 characters that they want and the Summons then guarantees them one of the characters they selected.

To celebrate the 6th Anniversary there will be a Free Daily Brave Souls Summons. Players will have the chance to perform a free x10 summons once per day up to ten days for a total of 100 Summons and Step 10 guarantees a ★5 character.

6th Anniversary Quest: From the Heavens, From the Stars

In commemoration of the 6th anniversary, the 6th Anniversary Tower has appeared as a single player high difficulty Senkaimon Quest!

In addition, various in-game campaigns will be held to commemorate the 6th anniversary! For details, please see the official website and in-app announcements.

*For details on the campaign, please check the in-app notifications.

*Please note that campaign contents are subject to change without notice.

Do you remember it all? The Kurohitsugi Challenge is On!

Aizen has been revealed as the 6th anniversary celebration character! In celebration of Aizen we are holding a full incantation of Kurohitsugi challenge starting Friday, July 23!

Use the hashtag #KurohitsugiChallenge and try to complete Hado 90 Kurohitsugi!

*For details about the campaign, visit the Bleach: Brave Souls Special Site that will go live around 15:30 JST (scheduled) on Friday, July 23.

To celebrate the 6th anniversary of Bleach: Brave Souls we are giving away prizes to 2,000 lucky winners in this retweet campaign starting Saturday, July 24!

2,000 people will be selected to get prizes like a Brave Souls Original Acrylic Block, an Amazon gift card or a Revolution Pro Controller 3!

During the campaign period, fans can enter daily for a chance to win!

Prizes
Up to 2000 people will be chosen at random to win amazing prizes!

*Amazon is a registered trademark of Amazon.com, Inc. 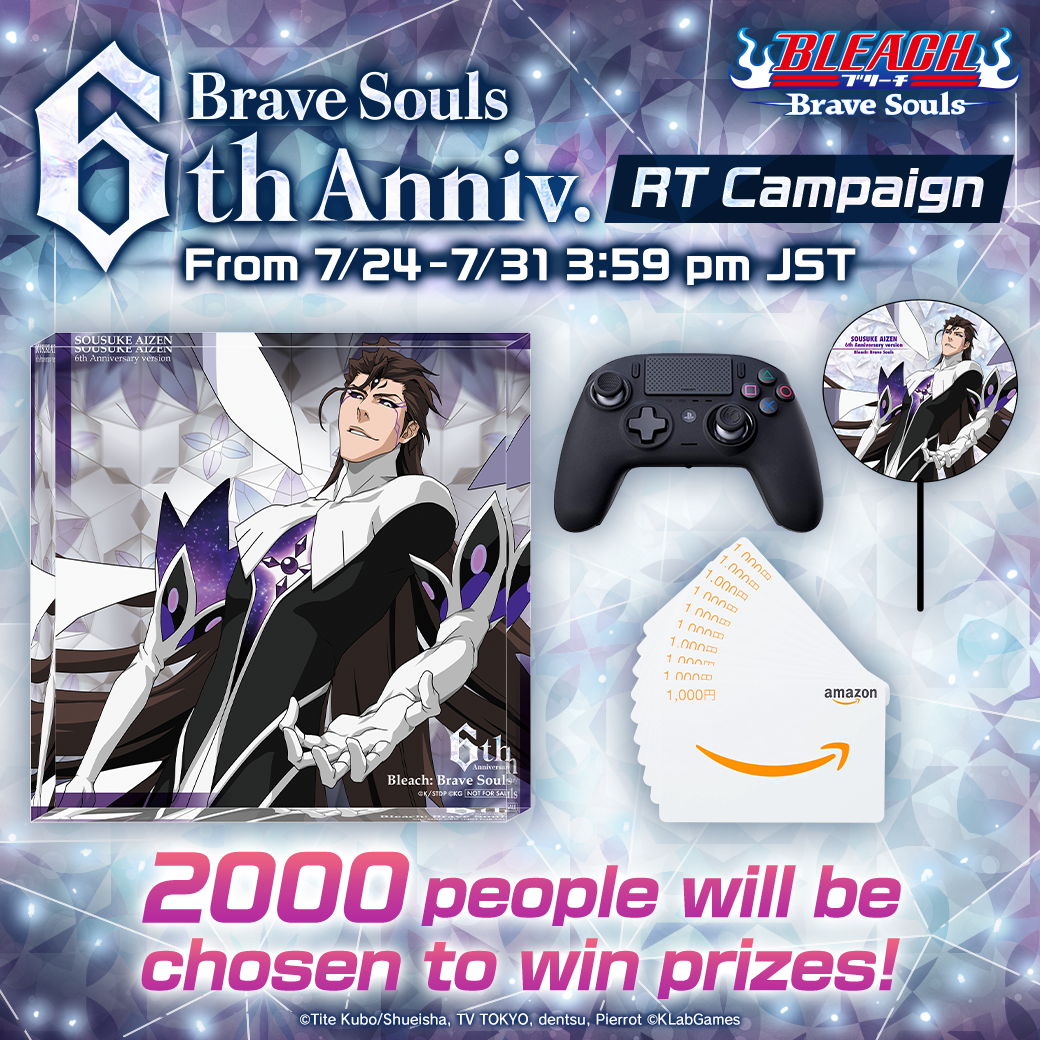 *For details about the campaign, visit the Bleach: Brave Souls Special Site that will go live around 15:30 JST (scheduled) on Saturday, July 24.

*Please note that campaign contents are subject to change without notice.

This project is based on Bleach, a popular Japanese manga featured in Shueisha’s landmark comic anthology, Weekly Shonen Jump, until issue #38 of 2016. The series premiered in 2001, quickly gaining a dedicated fan base and selling a total of over 120 million copies of the 74-volume manga series. Bleach has become a powerful media franchise, spawning an animated television series that ran from 2004 to March 2012, and a total of four feature-length films that have been released in theaters to date. In addition, 2020 marks the 20th anniversary of the serialization, and the “BLEACH 20th Anniversary Project” is currently underway. The series’ popularity extends beyond Japan, to an international audience, where it continues to find new fans and dedicated followers around the world.

*Not compatible with Mac/Linux.

All other trademarks or registered trademarks are the property of their respective owners.

KLab is a leader in online mobile gaming. Founded in 2000 and headquartered in Tokyo, the company is listed on the 1st Section of the Tokyo Stock Exchange. KLab has consistently ranked as one of the top 52 grossing game publishers worldwide since 2012. With its emphasis on quality and innovative games, KLab continues to grow at a rapid pace, expanding beyond the Japanese market with an office in Shanghai. For more information about KLab, please visit https://www.klab.com/en/.