Tuesday, July 2, 2019 — Independent video game publisher Gaming Company and developer Pixelated Milk are proud to announce that WARSAW, a tactical WWII RPG set during the titular Warsaw Uprising in 1944, will launch on September 4th, 2019 for PC via Steam.

WARSAW sees you lead the Polish underground resistance in their brave fight against the city’s Nazi oppressors. Recruit, develop and manage your fighters as you take them into battle in an immersive urban warfare experience. Encounter patrols, aid citizens and make tough decisions that will affect the resistance’s fortunes permanently. In WARSAW, death is permanent, with fighters killed in battle being lost forever, their death’s having an impact upon their loved ones and the resistance’s overall morale.

A blend of RPG and strategy, WARSAW requires careful resource, equipment and team management as ammo, supplies and people are finite resources. Acting as your base of operations, the resistance hideout will allow players to customize each member’s abilities and weapons within a deep and interlocking combat system that encourages experimentation and cooperation.

Players will need to leave the safety of their hideout to liberate each of the city’s multiple zones. Scout the streets, collect resources, recruit new members and engage with enemy assailants. An intricate turn-based combat system will mean flanking, cover, positioning, weapon range and ammo consumption all need to be taken into account during firefights.

With a beautiful-hand painted art style WARSAW’s character, enemy and environment design is the product of months of research and consultation with historical experts to create fully accurate uniforms, weapons, city layouts down to the stylized font used in the UI.

Now with German, French, and Russian localisation, in addition to Polish and English language options, WARSAW will release September 4th 2019 on Steam and will now be arriving on consoles at a later date. 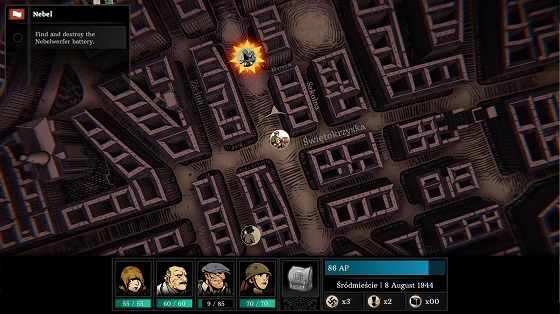 Keep up with WARSAW:

Known for their warmly received JRPG, Regalia: Of Men and Monarchs, the team at Pixelated Milk have been hard at work over the past year and more on the upcoming tactical RPG, WARSAW.