St. Catharines, Canada. November 12, 2020 – Indie game developer PixelNAUTS is pleased to announce their new racing party game Rocket Rumble is coming to PC in Early Access beginning of 2021. Combining the best parts of combat racing and fast-paced action fighting games, Rocket Rumble is a 2-4 player party game where a charming cast of animals in rocket suits smash and bash their way across the finish line. 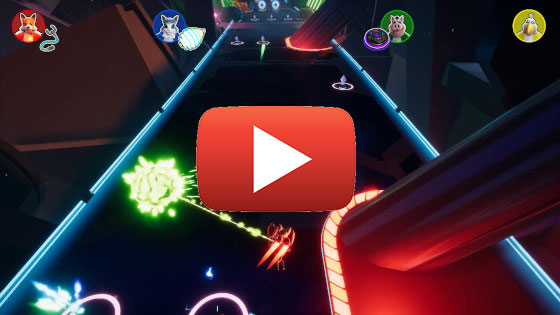 PixelNAUTS will host a close Beta for Rocket Rumble before the end of the year. Early registrations are open through their official channel. For more information on Rocket Rumble, check out the Steam page.

Rocket Rumble features single-screen, online multiplayer, and action-packed combat across 9 different obstacle courses. Race through an Asteroid Mine, Star Forest, amidst a Galactic Battle and through a dangerous Space Reef, avoiding asteroids, machines, lasers, creatures and plant life. Players will have the choice to pick from and customize 8 different quirky animals equipped in mighty mech suits.

Players can fully customize their matches, selecting specific tracks, a custom playlist, or signing up for the full championship, all while specifying the settings such as rules, items, and speed of the game.

While racing is fun, using items is the heart of Rocket Rumble. Launch rockets, bombs, and electrifying EMPS. Lasso other players and throw them around, deflect rivals with a powerful plasma shield, or rocket your way into first place!

Get ready to smash and bash your way through 9 space-themed courses in the ultimate rocket-powered racing game. Sign up now to receive more information about the beta.

PixelNAUTS is a game development company, founded by Alex Golebiowski and Chris Iacobucci. Incorporated in November 2010, PixelNAUTS moved into its offices in St. Catharines, Ontario in January 2011. PixelNAUTS quickly established itself as a game development studio, providing art development services for other companies, and working on original content in-house. Since inception, they have contributed to a variety of high-end productions across a broad range of platforms. PixelNAUTS launched LOST ORBIT: Terminal Velocity in 2019 on PS4, Switch, Xbox, and PC.