REDWOOD CITY, Calif. – March 23, 2021 – Today, Perfect World Entertainment, a leading publisher of online games, and Cryptic Studios announced Magic: Legends has entered Open Beta on Arc Games and the Epic Games Store. For the first time ever, millions of players from around the world will be able to experience the free-to-play, persistent-world, action RPG set in the iconic Multiverse of Magic: The Gathering. Those who join the game’s Open Beta will assume the role of a powerful, spell-wielding Planeswalker and travel across five diverse regions while collecting more than 175 powerful mana-based spells and 170 pieces of Equipment inspired by the original strategy game. Magic: Legends will launch on PC, Xbox One and PlayStation®4 later this year. 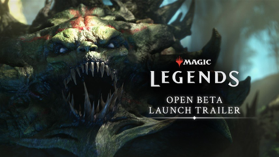 “Once again Cryptic Studios has demonstrated their ability to bring a beloved franchise like Magic: The Gathering to life in a way that feels authentic to fans and welcoming to players new to the Magic Multiverse,” said Yoon Im, CEO of Perfect World Entertainment. “As the first-ever action RPG based on Magic: The Gathering, Cryptic has created something really special with Magic: Legends. With this Open Beta period, we are excited to see how players experience the game and look forward to hearing their feedback.”

“This is truly a historic moment for the team here at Cryptic Studios,” said Stephen Ricossa, executive producer at Cryptic Studios. “Magic: Legends has come such a long way since we first pitched the idea to Wizards of the Coast back in 2016. The team has spent the last few years creating an action RPG experience unlike any other, which combines the power fantasy of becoming a Planeswalker with fast-paced combat tied to strategic deckbuilding. We’re excited for players to take their first steps into the Multiverse today.”

Magic: Legends allows longtime fans of Magic: The Gathering to explore the Multiverse like never before. After selecting from one of five Planeswalker starter classes, players will travel to different regions made famous by the celebrated card game, including Innistrad, Tazeem, Benalia and more. While exploring these planes, players will collect Artifacts, Equipment and mana-based spells, which will be used to help them build a deck of powerful, randomized attacks. A full list of the game’s key features includes:

In addition, players will explore five diverse regions across four planes, lifted directly from the Magic: The Gathering card sets:

Players will also harness the power of their Spark to build on and progress their own personal fragment of the Meditation Realm – an ever-changing plane of mysterious origin and countless secrets that serves an unknown master.

Magic: Legends is a free-to-play, persistent world, hack’n’cast online Action RPG based on Wizards of the Coast’s iconic strategy card game, Magic: The Gathering. Ancient forces move in the darkness, requiring players to assume the role of a Planeswalker, powerful spellcasters who can travel between planes. While exploring different planes, players will collect mana-based spells and strategically build out the perfect deck of balanced attacks to control the chaos of the battlefield and save the Multiverse from its greatest threat yet. Developed by Cryptic Studios and published by Perfect World Entertainment, Magic: Legends will release on PC, Xbox One, and PlayStation®4 in 2021. For additional details, visit PlayMagicLegends.com

Perfect World Entertainment is a leading publisher of online games in North America and Europe. The company is known for creating and publishing titles based on well-known global entertainment franchises, such as Star Trek, Dungeons & Dragons and Magic: The Gathering. Its product portfolio also includes the popular Torchlight series, as well as Remnant: From the Ashes, in partnership with development studio Gunfire Games. Founded in 2008, Perfect World Entertainment games have cumulatively grossed over $1 billion in their lifetimes. The company is a subsidiary of Perfect World Group, and is headquartered in Redwood City, California. For more information, please visit: www.perfectworld.com

Cryptic Studios, Inc. is a leading developer of online games committed to delivering the next level of gameplay. Cryptic Studios, Inc. develops AAA titles for PC and is rapidly diversifying its portfolio of games to expand beyond the traditional MMORPG genre. Its successfully launched titles include Champions Online: Free for All, Star Trek Online and Dungeons & Dragons Neverwinter. Cryptic Studios, Inc., a subsidiary of Perfect World Group, is located in Los Gatos, CA.

ABOUT WIZARDS OF THE COAST

Wizards of the Coast LLC, a subsidiary of Hasbro, Inc. (NASDAQ:HAS), brings people together through their shared love of games. Dedicated to the global community of players and fans bound together by their love of both digital and in-person play, Wizards of the Coast prides itself on bringing unique gameplay, deep strategy, and fun to all its gaming experiences, which include an array of beloved and powerful brands such as Magic: The Gathering, and Dungeons & Dragons. For more information about Wizards of the Coast’s world-renowned brands, visit www.wizards.com

Storytelling and Tactical Combat Combine in Ash of Gods !! Coming in 2018 !!

PREPARE FOR A TREAT FOR ALL YOUR SENSES WITH ASH OF GODS STORYTELLING TACTICAL RPG SET FOR 2018 RELEASE New Trailer Showcases Game’s Stunning Hand-Drawn Art Style Moscow, Russia – December 20, 2017 – Fans of storytelling and Tactical RPGs can look forward to an exciting new gameplay experience with Ash of Gods, coming in March 2018 from […]

TO YOUR LAST DEATH Racks Up Awards and Nominations, Free on Amazon Prime

“A strikingly animated, carnage-filled romp that mashes up genres and packs some nice surprises” — Dread Central “Raises ‘everything and the kitchen sink’ to a cosmic level and revels in its ability to annihilate convention.” —  Rue Morgue “Great animation that will have any horror or comic book fan happy” — Nightmarish Conjurings Los Angeles, CA — To Your Last […]

60 Seconds! Reatomized launches on Steam on July 25, bringing you a remastered edition of the original 60 Seconds! fallout survival!

he post-apocalyptic dark comedy is back – remastered and even more radioactive than before! Scavenge supplies, rescue your family, and stay alive in your fallout shelter. Make difficult decisions, hunt mutant roaches… and maybe survive. Or not. POZNAN, PL – July 19, 2019 – Today, developer Robot Gentleman is excited to announce that 60 Seconds! Reatomized, a […]